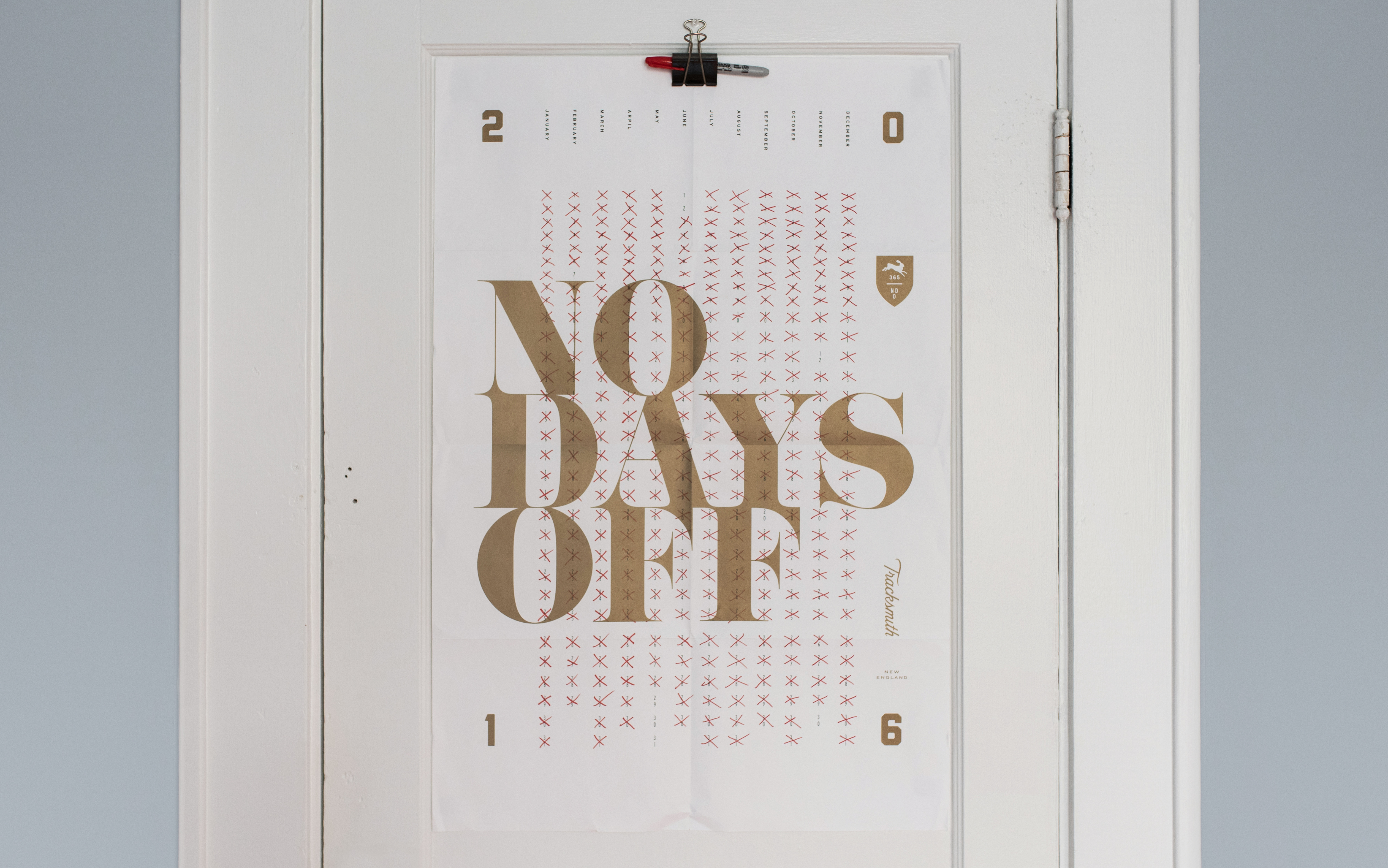 Two years ago hung a Tracksmith No Days Off poster behind me at my desk — it hung there purely for looks and not function, as I didn’t necessarily care to count the days in which I ran. In 2016, I hung another poster, this time in the privacy of my bedroom. Here is where I embarked on my commitment to consistency, learning to better understand my training, and in the process discovered the benefits of taking less time off.

Keeping this calendar confined to the privacy of my own room is important to note — I feared sharing my practice of this philosophy with anyone publicly because I knew what they’d say.

“No days off? You’re going to get injured.”

“That’s not healthy for you.”

I knew they’d only see it on a surface level. No Days Off to most people naively equates to a continuous breaking down of the body when really it’s far from that. 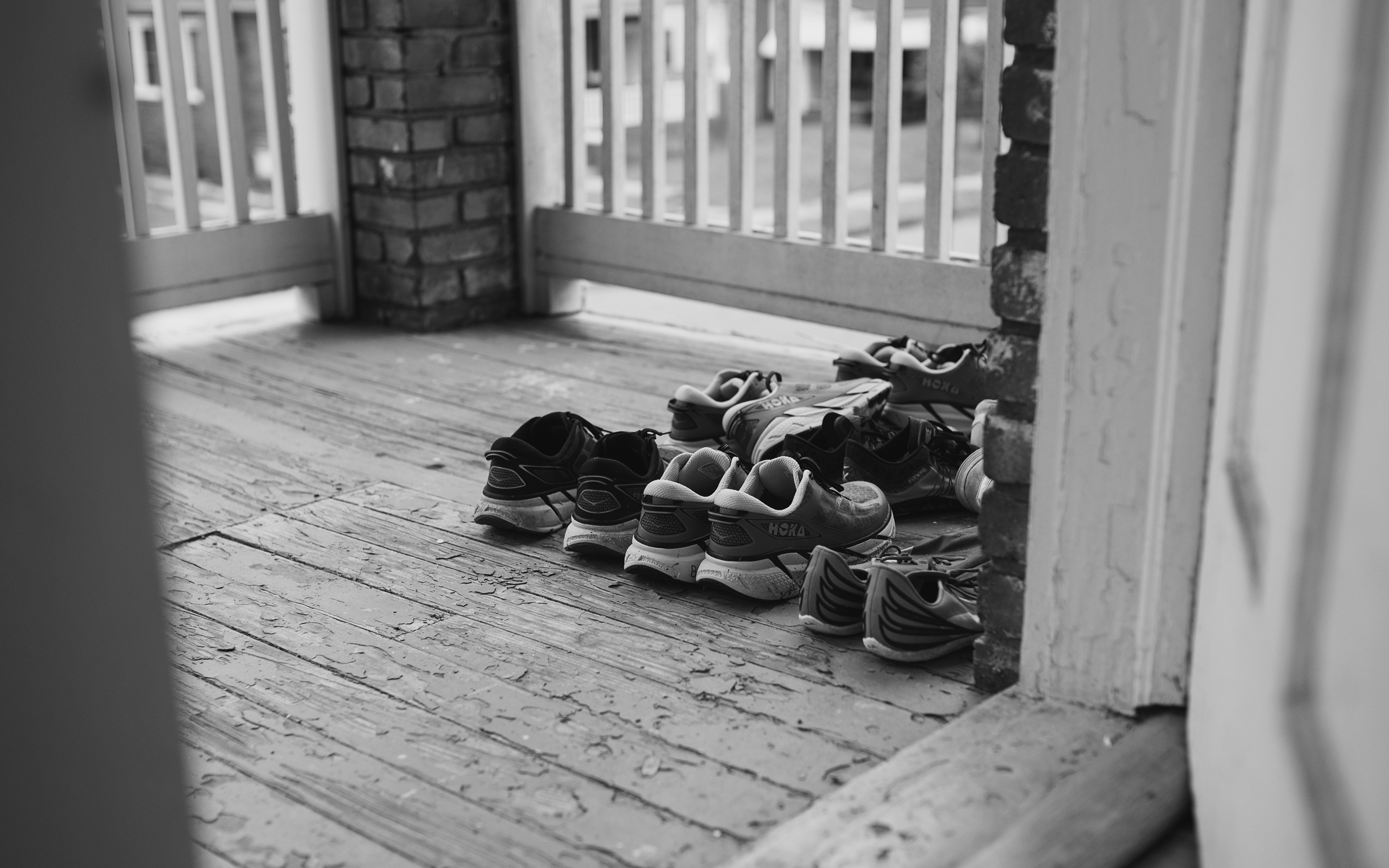 Running to your Death

There’s this misconception that running is inherently bad for you, never mind the notion of running every day. We’re led to believe that running eventually results in pounding your bones to dust, or you’ll eventually hit a threshold of mileage where your kneecaps simply explode.

We live in a society where athleticism is considered extracurricular rather than the norm or expectation, and the trend of anti-athletic pride which litters the internet certainly doesn’t help. At large, we’re simply uneducated when it comes to athletics, exercise, and generally understanding our bodies. So much so that it’s easy to forget that our bodies are naturally mobile and intended to move.

My First Day Off

My journey of No Days Off began with the understanding that I’ll probably take days off because No Days Off isn’t necessarily about no-days-off. This is confusing, I know, but going through this journey helped me to better understand the process which is more about an understanding of oneself — physically, emotionally, and psychologically.

On February 6th I woke up with a sore throat and a headache — not the ideal way wake up the morning of a race. By this point I had already ran for 62 consecutive days (pouring over from the month of December) and I’d be lying if I said I didn’t start to worry about what it’d mean to take a day off. With a 10k just 4 or 5 hours ahead, there was no doubt that I’d still race, but I was certainly thinking of the fate of the next day. Would sickness get the best of me? Will I be able to go for a run?

The race neared, it was cold, windy, and I wasn’t feeling any better, in fact, I felt worse than when I woke up. By this point I had stopped thinking about No Days Off, all I focused on was the race in front of me. However, immediately after I crossed that finish line and went into my cool down, I had to face reality. As I struggled to breathe out of my nose and an itch sat in the back of my throat, all I could think to myself was, “I’m going to have to break the streak tomorrow.” 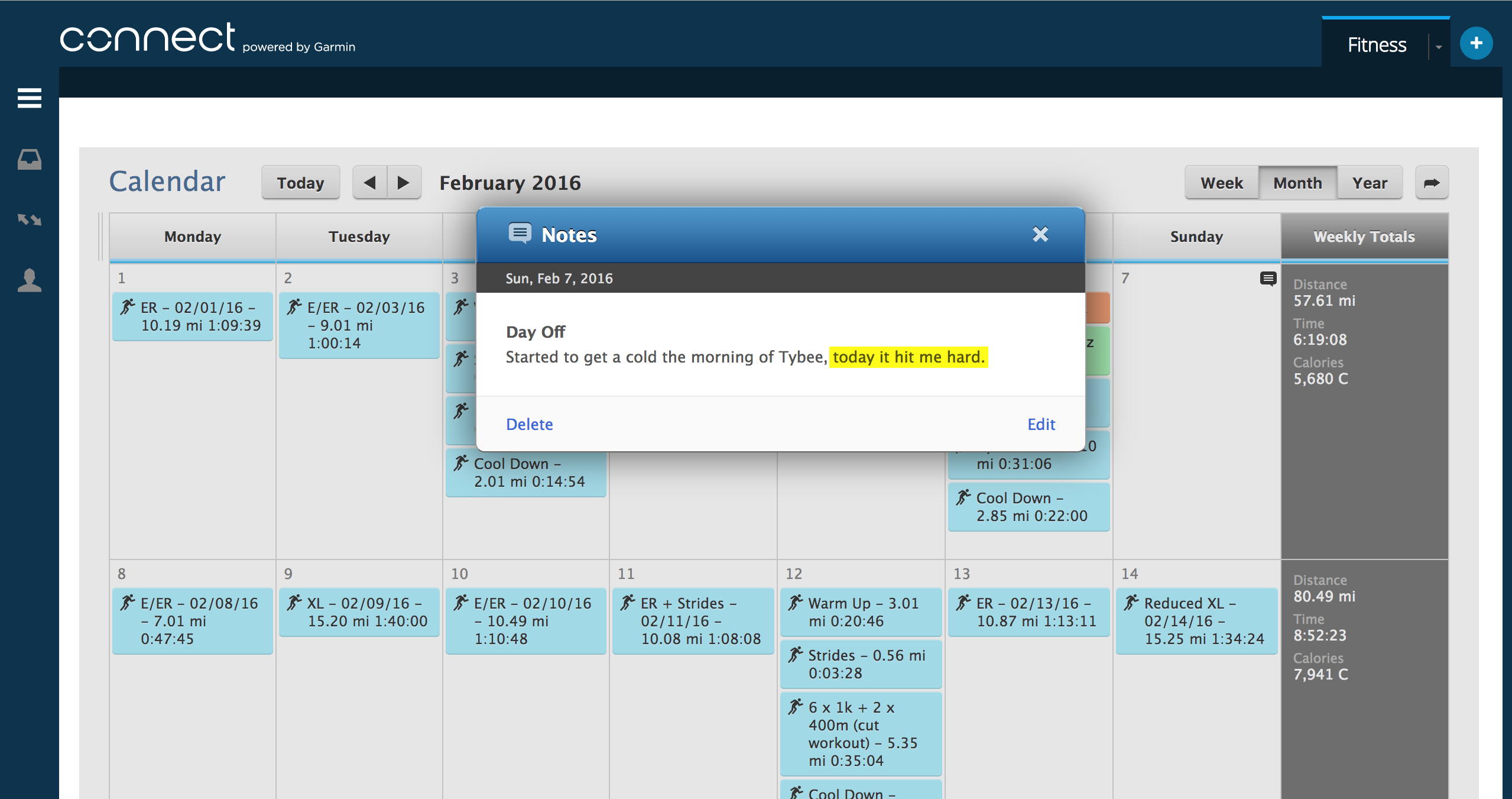 Common practice in running is to take days off, that’s just what you do. We’ve been told over and over again that taking days is how we recover, and so we take days off without really thinking about it.

Had a week with two really tough workouts? Take a day off to recover.

Don’t want to over work yourself? Take a day off to recover.

Just ran a race? Take a day off to recover.

Need to freshen up before a race? Take a day off to recover.

Want to stay healthy? Take a day off to recover.

But over the 6 years I’ve been running, I’ve always wondered why I felt worse after taking days off rather than feeling refreshed. Days off were supposed to fix me, right? So why are they leaving me feeling stiff and achey when I hop back in? I figured this was just a part of the process because days off are always placed on the pedestal of recovery, so I never questioned it — I accepted my stiffness for “recovery.”

The problem is that we sit for hours on end — every single day. So when it comes to taking a day off of running, I found myself just sitting all day. When we’re sitting, these bodies of ours which require movement aren’t receiving the activity they need to optimally function. I would wonder why I always felt worse after taking days off rather than refreshed, but it’s because by not running I was counter-acting my bodies ability to actually recover and function as it should.

Being a student and working as a graphic designer, I spend an endless amount of time sitting everyday — I realized that with this sort of lifestyle my body can’t really afford a day off without the motions of running. So when I stopped prescribing days off and instead ran to recover, I was actually recovering quicker from hard efforts than I was when I simply took the day off. 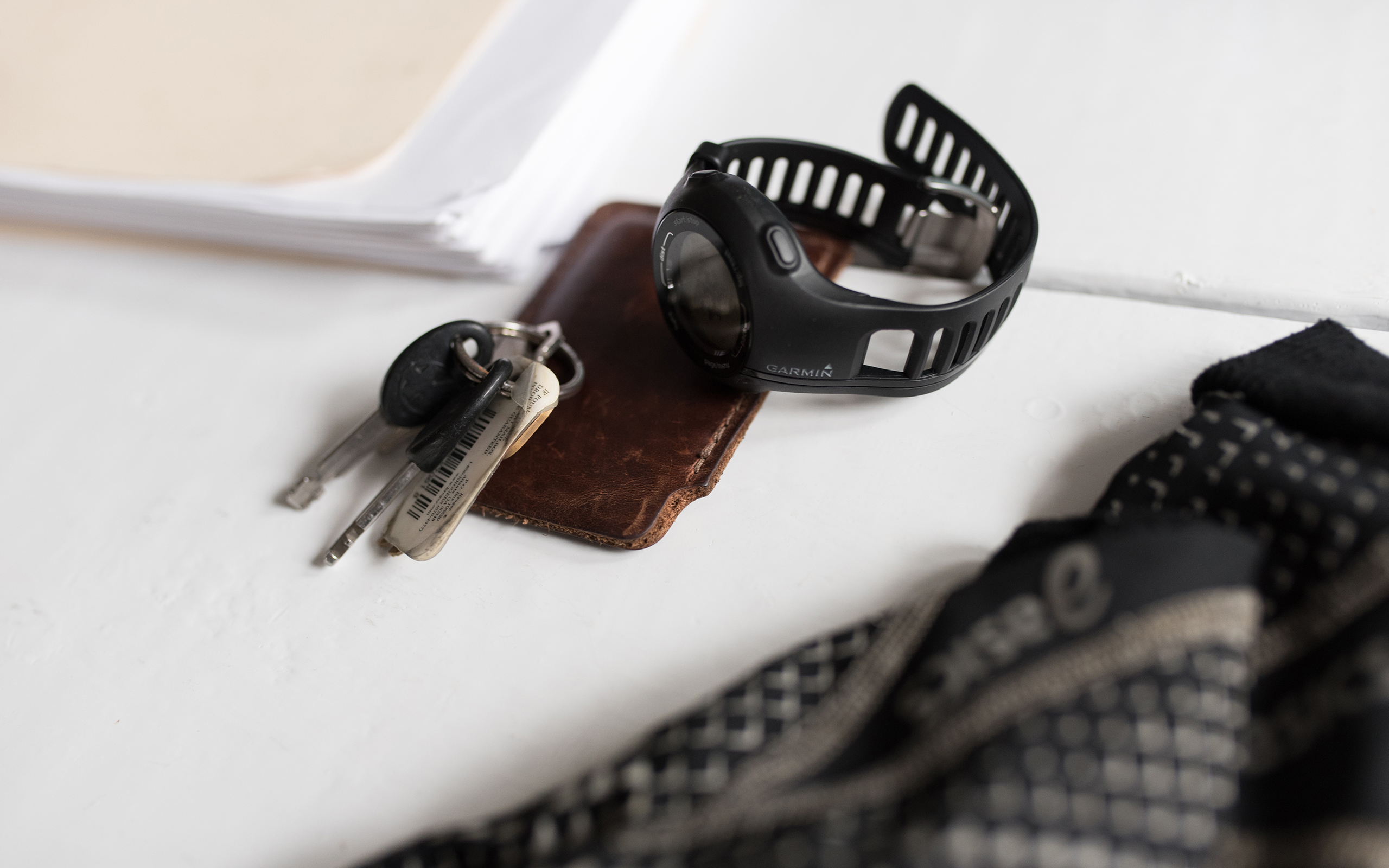 What If I Run Even More?

This year, I not only took less days off than ever before (9 compared to 46 last year), but I also went out for more doubles (ran twice a day) than ever before (35 compared to 2). I truly set out to better understand my training and test whether or not running to recover actually worked for me. It was almost as if I replaced “take a day off” with “go for another run.” So when I felt I needed to recover more, I went for another run.

Had a week with two really tough workouts? Go for another run.

Don’t want to over work yourself? Go for another run.

Just ran a race? Go for another run.

Need to freshen up before a race? Go for another run.

Want to stay healthy? Go for another run.

That’s exactly how I approached my training this year. To help recover from a workout, I’d go for a really slow shakeout in the evening to help flush out my legs. After races, runners are notorious for taking a day off to recover, but I took an inverse approach. After most of my races this past cross country season, I’d go for another run in the evening just to help loosen up my legs, especially after sitting in a bus for hours on end.

The first mile of these post-race shakeout runs were always stiff, but by 8 or 9 minutes my legs would begin to loosen up and it’d feel as if I hadn’t even raced that morning. As most people were taking the day off, I had gotten to a point where I would recover quick enough to go for a long or extra long run the next day. In the past, for every day off that I took I’d feel rusty for two, yet here I am going for additional runs and feeling better and recovering quicker than ever. From what I’ve been taught over the years, this isn’t how things are supposed to work.

With all of that being said, it’s important to note that I deliberately set out to recover more effectively this year. I may have ran more, but I also ran slower on average. In my last year at college, I’ve returned to running slower on my easy and easy-recovery days than I did when I was a freshman in college or even a senior in high school for that matter.

From a distance, No Days Off seems like it’s about the “hustle” but it’s far from that. In fact, this year I may have ran more, raced faster, and trained harder than ever, but this year has also been the most relaxed I’ve ever been in regards to my training. No Days Off was less about no-days-off, and became more about enjoying the run.

Although I’ve found that running more frequently and consistently positively contributes to my recovery, that alone doesn’t do the trick. This gradual increase in mileage over the years is what establishes my life-time mileage. You earn your recovery rate when you pair your life-time mileage with your commitment to consistency. 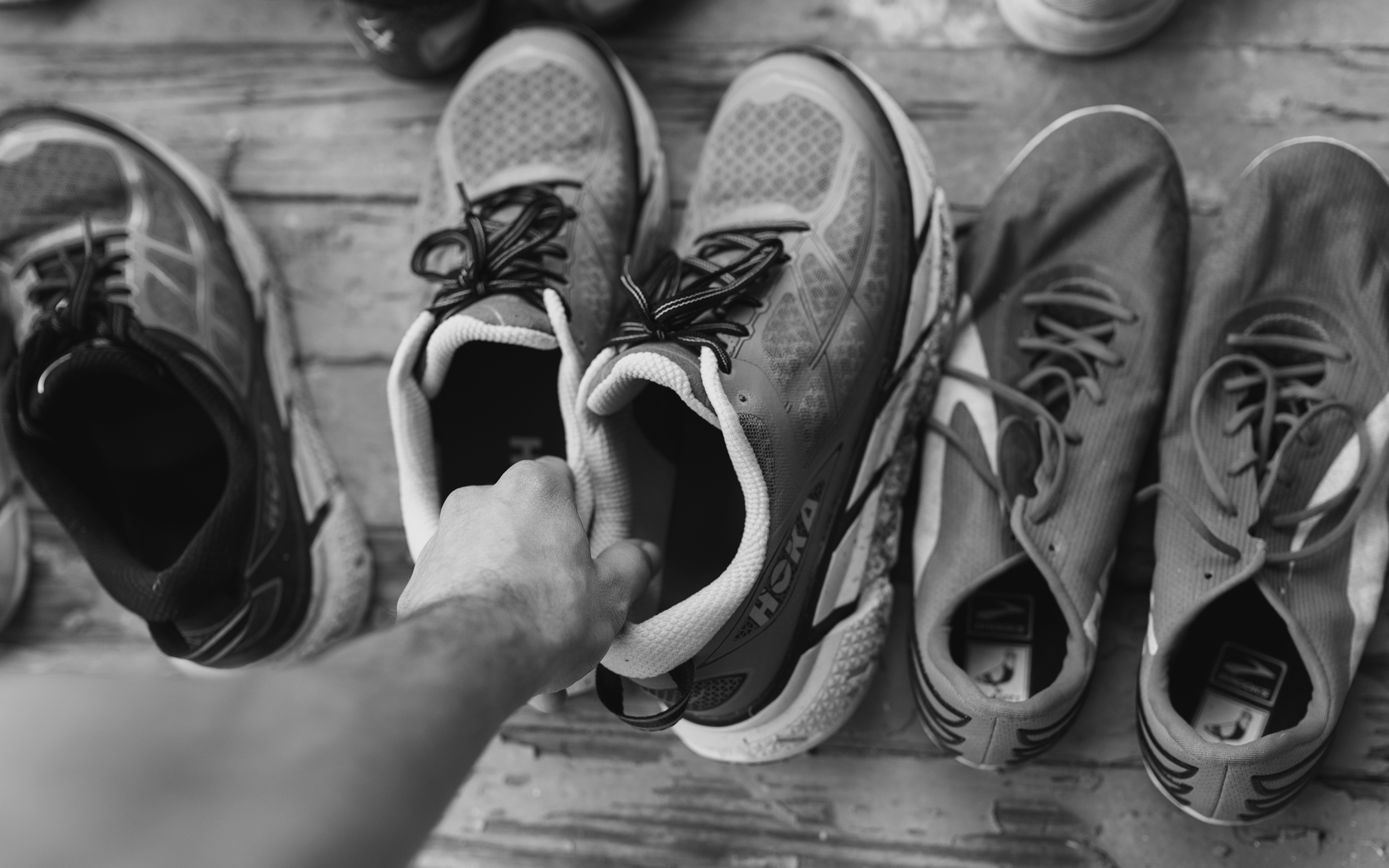 None of this is to suggest that No Days Off is some sort of silver bullet. This isn’t to say you need to run every day. This isn’t to say running more and going for doubles will guarantee that you’ll recover quicker. Instead, all of this is to encourage you to learn how you operate and train best. Too often we simply accept the conventions set before us without questioning whether or not they actually work for us individually.

Invest in yourself this year — learn what keeps you healthy, what gets you fit, and most importantly, what makes you happy.

How to Paint a Brick Wall